I was talking only yesterday night to Jennifer and Onyinye about plagiarism and how it is the fastest route to be deported in civilised societies. Walahi, if you want to return to your country and you don’t have transport, let me give you free advice and you can thank me later: plagiarise and ensure you get caught. The only thing I will add to that one is that no (reputable) university in the western world would look at your application to study, teach or affiliated with them in any capacity. Except maybe as a cleaner or one of those other odd positions. Well, that one too na job, no be so? Na you know.

Anyways, this morning here we are and my dear uncle/friend/biggest brother Chuma has one more tale for the road: of plagiarism of a high order. Haba na, some people should borrow sense small. So, the gist is that a certain new movie, MR PRESIDENT written and directed by BRIGHT WONDER plagiarised Chuma’s short story, ‘The Ten Commandments of Nigerian Politics.’ In Africa, people’s names often portend their future or somehow they get to live lives similar to their names directly or indirectly… Walahi, this oga is a bright wonder! And to think that Chuma has been advocating the #BribeCode project which seeks to end grand corruption while there is grand corruption playing ten-ten in his backyard.

END_OF_DOCUMENT_TOKEN_TO_BE_REPLACED 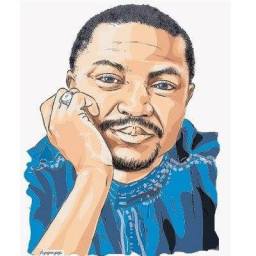 THREE WORKSHOPS – And you can apply for any or ALL of them!
1. If you are interested in any of the writing workshops (Fiction with Abubakar Adam Ibrahim; Spoken Word with Efe Paul Azino; Poetry with Chuma Nwokolo), kindly send us an email saying why you would want to attend the workshop and then a sample of your work (a piece of fiction not more than 2,000 words for the fiction workshop; a poem that is not longer than 40 lines for poetry; and an audio recording or video for the spoken word workshop) to benuefestival@gmail.com. Kindly ensure you have the subject written as ‘Interest for [Genre] Workshop.’ Don’t forget to include your name, your address and phone number. Those selected for the workshops will have to pay N2,000 for the workshop.

END_OF_DOCUMENT_TOKEN_TO_BE_REPLACED

In a time when most people are shouting for change and clamouring for much, we seem to forget that it is the same chant that we have continued to rant. From Facebook to Twitter, we have continued to swim in the deception of our forgetfulness. We discover that each succeeding administration ends up beatifying those … END_OF_DOCUMENT_TOKEN_TO_BE_REPLACED

Civil war is anything but civil. It  interrupts life rudely:  targets civilians on the way to school, to market, to worship. The bombs are detonated by cowards in search of power, relevance,  notoriety. We think we know grief well enough, but we don’t. We think because he has called many times before, he will treat … END_OF_DOCUMENT_TOKEN_TO_BE_REPLACED

4th EDITION OF MBA COLLOQUIUM TO HOLD IN MINNA 10th-12th November, 2014 Pius Adesanmi to give keynote… The 4th edition of the Muazu Babangida Aliyu (MBA) International Literary Colloquium comes up from 10th – 12th November, 2014. This year’s Colloquium will run for two days; Pre-colloquium day (for commissioning of Multimedia and Arts Gallery) and the … END_OF_DOCUMENT_TOKEN_TO_BE_REPLACED

It is billed for Ibadan, 15th March 2014 at NuStreams Conference Centre, KM 110 Abeokuta road, Alalubosa GRA Extension, Ibadan. 3:00pm…. Who is Chuma Nwokolo? Are you asking me? Choi! One of the most gifted poets and short story writers from these parts. I was in a vehicle a few days back traveling. I clutched my … END_OF_DOCUMENT_TOKEN_TO_BE_REPLACED

Saraba is pleased to announce the 2013 longlist for the PEN Nigeria/Saraba Poetry Prize. The PEN Nigeria/Saraba Poetry Prize 2013 shall be awarded to the writer of the winning poem selected from all poems published in Saraba in 2012. The publishers and poetry editor of Saraba have made a longlist of five poems, from which Jumoke Verissimo will make … END_OF_DOCUMENT_TOKEN_TO_BE_REPLACED

Name: Meme Jumai. Occupation: Farmer. Residence: Ikerre-Oti, Delta State, Nigeria. Date of Birth: 5 June 1950. Date of Death: 15 June 2000. Cause of Death: Awaiting Inquest. 1 June 2000. When I woke, I was sweating as if I were on the farm. Yet it wasn’t the sweat of hard work that wet my bed-sheet … END_OF_DOCUMENT_TOKEN_TO_BE_REPLACED

THOUGHTS ON CHUMA NWOKOLO (JNR)’S DIARIES OF A DEAD AFRICAN[1] by Su’eddie Vershima Agema Chuma Nwokolo’s Diaries of a Dead African is a good post-colonial text that weaves a story across two generations, that of two brothers and their father. It depicts a story of poverty, affluence, anger, bitterness, the Nigerian society of today and … END_OF_DOCUMENT_TOKEN_TO_BE_REPLACED